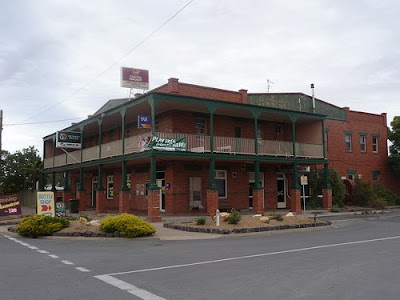 Charlton is a small and attractive rural town of tree-lined streets, situated on both banks of the Avoca River. Huge grain silos give the visitor a clue the main local industry, although in addition to this industry Charlton is the largest beef producer in Victoria. Charlton has a population of around 1300 people and is located 250 km north-west of Melbourne on the Calder Highway.
The Cricket Club Hotel is one of two hotels in town, and the crowded 'bistro' or dining hall looked busy enough to assume that the food here was going to be OK. We sat at the laminate table in the corner, trying to sit as far away from the Space Invaders machine that was being plundered by a pack about 5 young children.
Beer prices were impressive. At only $3.30 for a pot of Carlton Draught, Charlton was shaping up to be the place to drink in this Global Financial Crisis.
The menu was typical of your country pub, grilled steaks with chips and salad, chicken parmagiana, deep fried calamari and a roast. The Chicken Parmagiana was excellent. Obviously prepared on site and not bought in frozen, the chicken was well flavoured and excellently cooked. The salad was fresh and crisp and the chips crunchy, slaty and plentiful. The Scotch Fillet - Surf and Turf was also a good solid country meal. The prawns were clearly frozen and not fresh, and the creamy sauce was a commercialy produced prepackaged product. Despite these problems the beef was well cooked and the accompanying vegetables were not overcooked and tasted fresh. Now drinking my second recession busting Carlton Draught, I realised that the meals were not as well priced as the beverages. Mains were all about $22.00, about the same as you would pay in an outer suburban hotel bistro.
Overall the experince at the Cricket Club Hotel was good, and I would recommend it as good place to stop for a bite on your way up the Calder
Rating: 11/20
Labels: Cricket Club Hotel Review